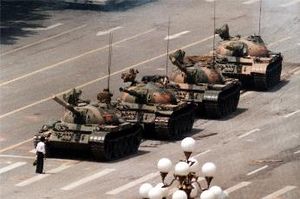 Photo Jeff Widener of the Associated Press
Two camps have emerged, those who see her as a heroine and those who think she is foolish, and has given the page program a black eye. The supporters are joyful, but the detractors are more meh! First lets take Jack Layton to the woodshed. For him to coldly chastise DePape was a window into his soul. He is not fighting Harper, he is playing a game, now that he is leader of the opposition, all the traditions, smoke and mirrors become subjects where protest becomes blasphemy. Does he not understand Harper has him exactly where he wants him, a milkbag in a gilded cage. Jack is happy to play his role in a Kubuki theatre where Harper and the conservatives do whatever they want. Jack should be celebrating DePage and agreeing we do need an Arab Spring in Canada. That would take the form of proportional representation. It is absurd we continue with a first past the post system. Unless Harper has a PR meltdown the conservative will be able to rule unmolested.


DePage never called for the elimination of the military. This is a straw man defenders of unjustifiable military expenses always put forward. “Should our troops fight with old equipment, should we just surrender to (insert enemy of the day).”The F35 is a overpriced underperforming airplane, a poor decision that will starve Canada’s military. Similarly the plan to set up military bases in 7 countries is another drain we don’t need. Canada is not the worlds police man and we don’t have to raise our hand every time the USA says “interested”!
More and better defendershere and  here

Email ThisBlogThis!Share to TwitterShare to FacebookShare to Pinterest
Labels: Stand for de page