The Game of Thrones will be a cultural phenomena bigger than Star Trek, Star Wars, Harry Potter and Twilight combined. This thread will collect tribute to its greatness. 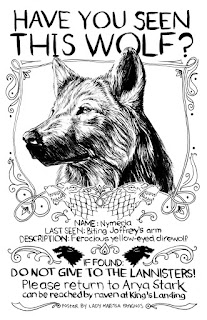 First lets start with the Simpsons.

US election Game of Thrones

Wow, a lot going on. I should have watched the last episode of Season One over again. As I have read all the books I was not lost, but I hope episode two has more focus. What really stood out was the baby killing, not in the book, and it was not clear to me they communicated the reason was to eliminate all the bastards.
This episode had the best ratings ever, a better episode should blow this away. 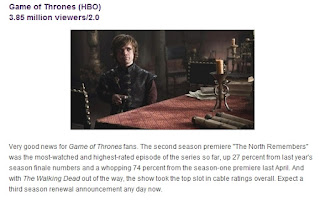 
What stood out was how far from the book the season is deviating. These little ripples could be waves by season 5. There is still way to many story threads going on. I am afraid the show will lose audience because it is to hard to follow. Without a continuous narrative the whole show looks like the "what happened last week" clips. It was a challenge for the book reader to keep it all to-gether, the director has to simplicity. I would take two threads per episode, and if you need two or even three episodes on the same timeline, so what!

Now its starting to jell. Hypocracy, betrayal and self interest rule. The casting of Brienne the woman warrior is perfect.


We hate Joffrey. The slow pace continues. However it is a complicated story. This episode was up to last years standard.


Conventional wisdom agrees this was the best episode of the Season. There is no singular reason for this, just the threads splayed in the first four episode are weaving themselves together into a focused  narrative. I wish the budget was there to have more action scenes instead of dialogue moving the story forward. Once again I have to wonder  how people who have not read the books are keeping up.


I was totally immersed  in this episode. I like how the recap is enhanced showing stuff never seen and keeping you on track. Danny loses her dragons, wow a huge deviation from the books.


Season two did not match season one in terms of overall satisfaction. Mostly this was because Season two had so many story lines to follow. It is disappointing that it has not been a huge ratings hit (4.2 million US viewers for the season finale) like the Sopranos (8.9 million for Season two finale), but maybe most people prefer their drama straight up. Nevertheless, it was the undisputed best show on TV for 2012.(as of June)

Email ThisBlogThis!Share to TwitterShare to FacebookShare to Pinterest
Labels: Game of Thrones is great

The problem is most governments have forgotten they serve the greater good, not their own self interests. Best practices, science, indisputable analytics, census, are all enemy's to be discredited. The means has become the ends.
http://krugman.blogs.nytimes.com/2012/03/05/economics-in-the-crisis/

http://www.businessinsider.com/this-chart-shows-the-bilderberg-groups-connection-to-everything-in-the-world-2012-6
Posted by Steve at Monday, March 05, 2012 No comments: