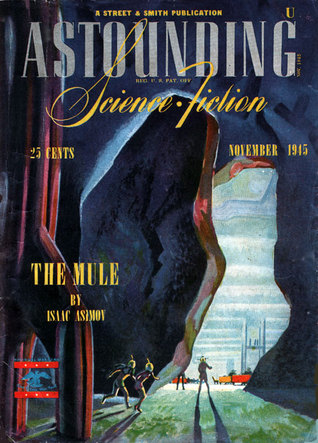 For example Foundation and Empire
written in 1945 predicted Trump


In addition to this internal corruption, an external threat arises in the form of a mysterious man who is known only as the Mule. The Mule (whose real name is never revealed) is a mental freak and possesses the ability to sense and manipulate the emotions of others. He uses this ability to take over the independent systems bordering the Foundation, and has them wage a war against the Foundation.
While his vassals prosecute the war, the Mule travels under the guise of a refugee clown named Magnifico Giganticus with Foundation citizens Toran Darell and Bayta Darell to different worlds of the Foundation. He uses his abilities to undermine the Foundation's war effort by speading despair and destroying morale. In the end, the Foundation falls without much of a fight.
Trump is forcing the deep state to twist itself into Gordian knots
that will split freeing humanity from the Nazi occupation of operation
Paperclip. Trump has mastered the art of chaos for his own amusement.
Rewarding the rich but threatening the golden goose at the same time.
Trump is a Republican dichotomy that can only harbinger turmoil
for the establishment

Today, historians point to the Spanish-American War as the first press-driven war. Although it may be an exaggeration to claim that Hearst and the other yellow journalists started the war, it is fair to say that the press fueled the public's passion for war. Without sensational headlines and stories about Cuban affairs, the mood for Cuban intervention may have been very different. At the dawn of the twentieth century, the United States emerged as a world power, and the U.S. press proved its influence.

until the world wars actually hit
home and woke the sheeple briefly
until the media adapted
and once again the blue water navy
of the mind
was in total control.

First Gulf War, Second Gulf
War, the fantabulist tale of 911
ISIS and the huge Russian threat
that only started when Trump
was selected.

This morning with Jake Trapper
it was outstanding. The panel of past spooks
a brass did everything but call Trump a traitor
for meeting Putin.  Then came the kill shot.
The Russian hacking activity as we speak is
making the red lights blink in exactly the same
fashion as they did leading up to 911. I guess we are
going to have to nuke Russia or more towers are
going to fall in perfect harmony
collapsing at the speed of gravity and pancaking
in their own footprint

Is the Russia threat nonsense?
Was the cold war nonsense?
Sure there was and remains
the aspect of Mutally Assured Destruction
during the cold war Russia and America
where in competition for vassal states
the Russians lost badly
due to software incompatible
with the human mind