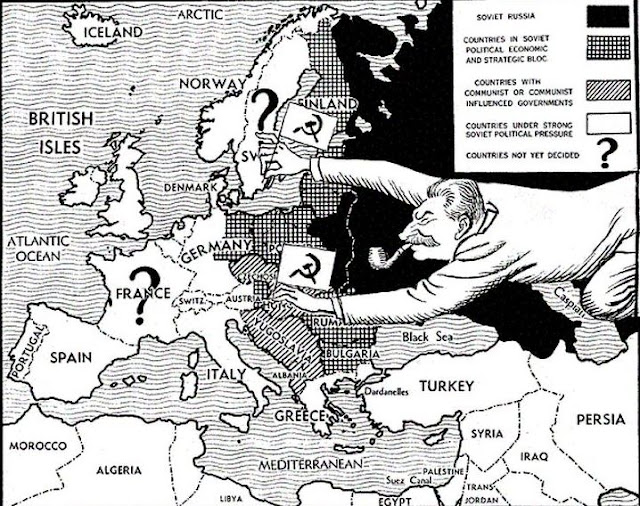 At the time dropping two A bombs was probably the best way to avoid bloodshed when ending the war with Japan.  Just as dropping one on Kandahar would have been the least bloody way to end terrorism following 911.

He founded the UN, launched the Marshall plan that succeeded brilliantly in Europe. Fought the Korean war that created the wonder that is South Korea today. He threw the weight of the US behind the creation of Isreal although I often thinkaboot better alternatives. He allowed America to absorb a lot of Nazi brains, and I am afraid this was a double edged sword.

He is the gold standard of post WW2 presidents 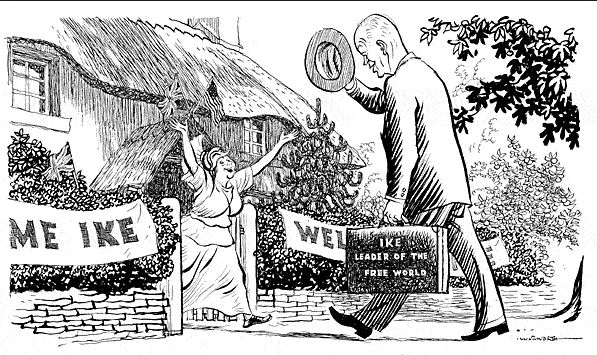 After the Soviet Union launched the world's first artificial satellite in 1957, Eisenhower authorized the establishment of NASA, which led to the space race. During the Suez Crisis of 1956, Eisenhower condemned the Israeli, British and French invasion of Egypt, and forced them to withdraw. He also condemned the Soviet invasion during the Hungarian Revolution of 1956 but took no action. In 1958, Eisenhower sent 15,000 U.S. troops to Lebanon to prevent the pro-Western government from falling to a Nasser-inspired revolution. Near the end of his term, his efforts to set up a summit meeting with the Soviets collapsed because of theU-2 incident.[5] In his January 17, 1961 farewell address to the nation, Eisenhower expressed his concerns about the dangers of massive military spending, particularly deficit spending and government contracts to private military manufacturers, and coined the term "military–industrial complex".[6]

On the domestic front, he covertly opposed Joseph McCarthy and contributed to the end of McCarthyism by openly invoking the modern expanded version ofexecutive privilege. He otherwise left most political activity to his Vice President, Richard Nixon. Eisenhower was a moderate conservative who continued New Dealagencies and expanded Social Security. He also launched the Interstate Highway System, the Defense Advanced Research Projects Agency (DARPA), the establishment of strong science education via the National Defense Education Act, and encouraged peaceful use of nuclear power via amendments to the Atomic Energy Act.[7]
Eisenhower's two terms saw considerable economic prosperity except for a sharp recession in 1958–59. Voted Gallup's most admired man twelve times, he achieved widespread popular esteem both in and out of office.[8] Since the late 20th century, consensus among Western scholars has consistently held Eisenhower as one of the greatest U.S. Presidents.
All good stuff, but he did allow the military industrial complex to take over the nation. (see above let Nixon handle the political stuff)
John Kennedy - C (incomplete) 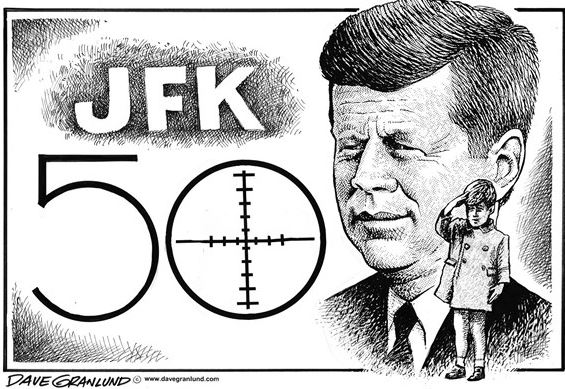 Kennedy was more of an idea than actual acomplishments. He was for civil rights, he was for space travel, he was likely against the horrific Vietnam war. The Cuban missle crises could easily have been the cataylst for thermonuclear war. This was the highpoint of his presidency, but it was his blunders in dealing with the Soviet Union that perticipated the crisis in the first place. Its also likely he overthrough the monarchy in Iraq starting a chain of events that we now see has spun out of control.
Lyndon Johnson - F 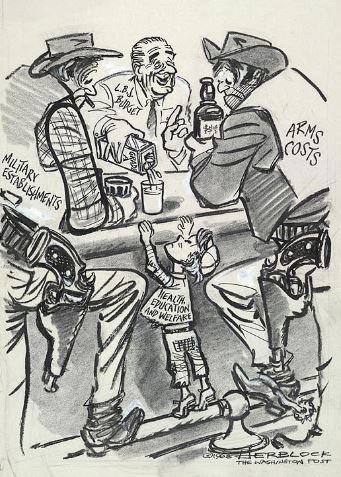 He legislated civil rights but in many respects it was a chimera. His great society has been terribly executed. The legacy of Vietnam alone destroys his place in history. Many believe he was direclty envolved in the assasination of JFK. and part of the deal is that he would not run for a 3rd term.
Richard Nixon - B+ 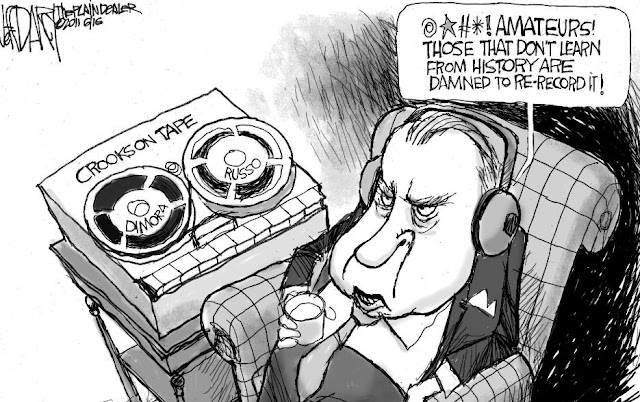 We now know that all politians play hard, Nixon was just caught red handed, or perhaps more likely set up beautifully. Was Bob Woodward ever a CIA operative? Why was Nixon manuvered to be in Dallas on the day Kennedy was assasinated?
He ended the Vietnam war. He created the EPA which while not perfect has been the best friend the earths enviorment has had since the day humans discovered fire. China can thank him for sparking their current economic miricle.
Perhaps his worst initative was defunding and realigning NASA.
Gerald Ford - F- 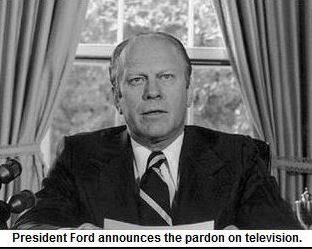 Pardoning Nixion was unpardonable. He opened the door to governing without consequences. On the plus side he made Chey Chase a national institution, and cemented Saturday Night Live as a cultral totem.
Jimmy Carter B-
President Carters reach[
WAS EXECUTED IN A WAY THAT
just barely exceeded his grasp. Had he not been sabatoged by the Iranian hostage crisis chances are he would have been an A+ president and the world a much better place today. Does anyone believe the second Ronald Reagan was sworn in the hostages were released was because they were intimidated. Ask why Iran Contra was almost suicidal?
His greatest accomplishment was a lasting peace treaty between Egypt and Isreal. Its likely that with a second term he could have made that universal.
Ronald Reagan F- - -  - - -- - - - - 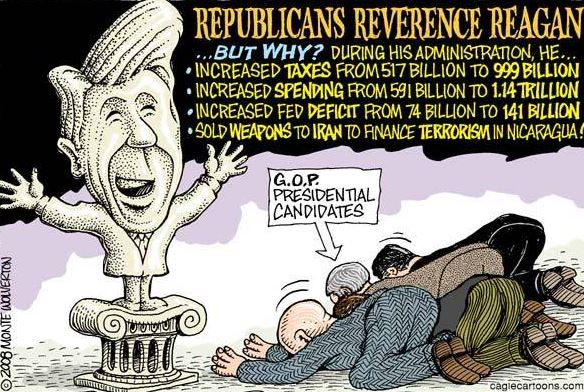 The black swan with the perpeturally natural black hair. Ronald Reagan appealed like Donald Trump to Americians most purient interests. His list of malfeance is endless and enduring. I will just pick three. 1) spend now pay later politics 2) American exceptionalism is real 3) God approves so I cant be wrong.

Everthing bad in the world today has a direct connection to the Reagan Presidency. including Trump being taken serioulsly. He lowered the bar so far that anyone who could crawl out from under a rock could be considered a legitimate canditate. 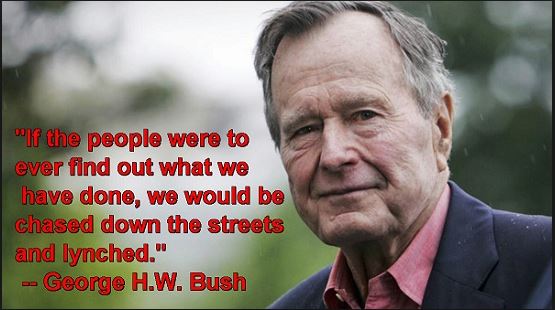 Many people think GHWB was the first crossover president. The leader of the shadow goverment also the leader of the free people. He flamed out worse than the F35 when it hits a rainstorm. This Bush thought he was an expert at shaping the battlefield. Sure he probably made hundreds of billions on the side. But he left the middle east a mess and without his deft hand, it was left to his idot son to try and get his drivers lic in the sand. Made things work with his charm and seamen. 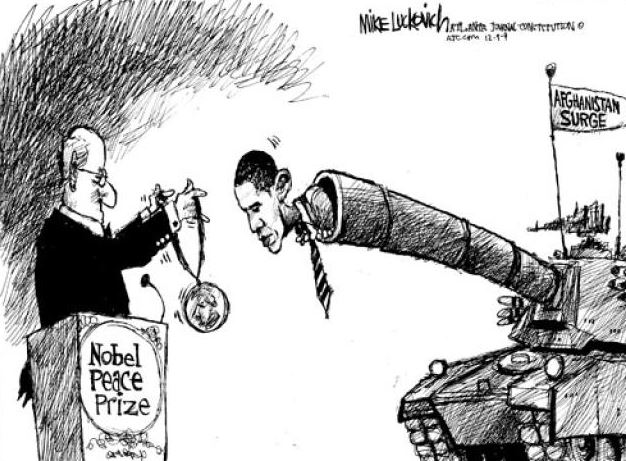 Inherited the worst mess of any President including FDR. The economy stil a work in progress by Goldman Sachs contractors. Approved the overthrough of the elected goverment of Ukraine to server the need for an enemy of the industrial industrial complex. Made black lives matter a legitmate voice. Bullied through Obama care which will fail spectaculary but pave the way for the obvious single payer choice. The TPP his betrayal.