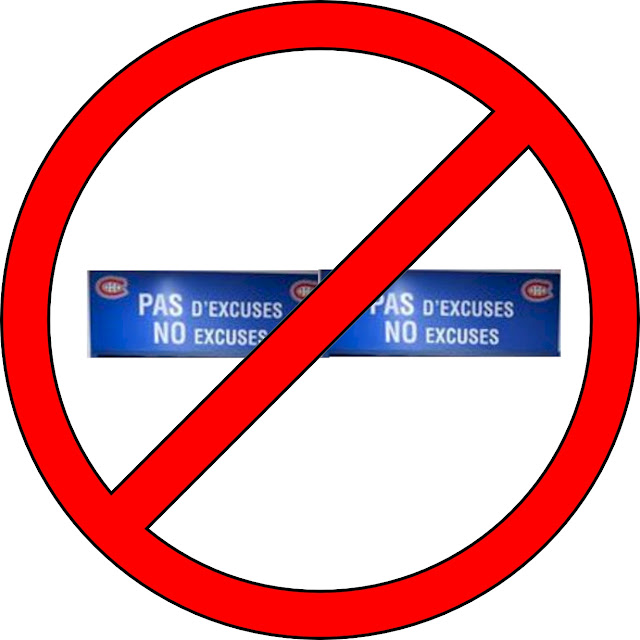 Did I say six years its more like 26 but who is counting. Based upon the last six years I would say having to hire a French coach is the excuse.

Well due to budget cuts the Analytics guy was given the job of making the player excuse statements to be used in the post game scrum, after all they never used him for analytics anyway.  After they fired him he leaked them to Julian Assage.

Of Course the coach has the first excuse  " they traded away PK nobody asked me!"

Radalov (Ché) -  " Strippers. Montreal Strippers take your breath away, next year wife says I am playing in Winnipeg"

Patchority (Patches) " I never played Jr Hockey, the NCAA is for pussies"

Alex Galchenyuk (gCHuck) " Coach does not understand, I am not a Russian, I am not a left winger"

SVEN ANDRIGHETTO (gHetto) " I am only 23, coach does not even learn your name until you hit 25"

STEFAN MATTEAU (likely not worth a nic) " I am only here because I am a pure wool, I cant play hockey, everyone know that"

DANIEL CARR (Auto)  " I was never drafted, has any player never drafted got his fair share of ice time with the Montreal Canadians?"

TOMAS PLEKANEC "A" (Super Plexxe) " sometimes my turtle neck causes me to overheat, I am going to talk to Jagr about that in the off season"

PAUL BYRON (LB Lord Byron) " DDD outweighs me by 30 lbs and look how he gets pushed around, what do you expect me to do?"

ANDREI MARKOV "A" (Vodkov) " I nearly 40 years old, the arrogant fuckface has me playing 30 mins a night"

ALEXEI EMELIN  (Y)  " My head weighs a ton cause of the steel plate, and I cant pivot right"

JEFF PETRY ** (Dish)  " I spent 6 years in Edmonton, nobody recovers from that"

The rest of the team " coach fucking hates me" or "coach is an idiot"
Posted by Steve at Saturday, August 27, 2016